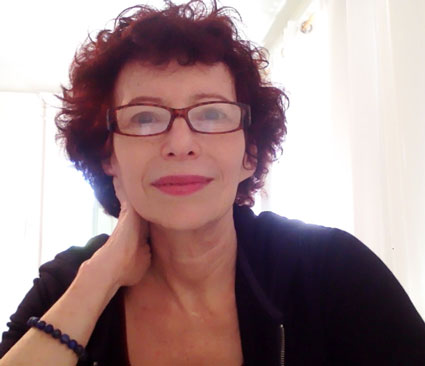 “Our life experience is everything. We have all the information we need. We just have to pull it out.”

Successful in every pursuit, she has earned recognition for her expertise – most notably a Guggenheim Fellowship for outstanding creative ability… while still only 30 years old.

So it’s come as no small shock to many that Gail has also been willing to walk away from her success, at almost every point, in favor of something more meaningful and personally fulfilling.

She describes the decision to do so as an “inner war.” On one side, you find stability, the familiarity and comfort afforded by an established path. On the other, you have the unknown yet, with it, considerably more freedom to experiment with and invent your next steps.

For Gail, the clarity and freedom afforded by letting go consistently win out. This fearlessness led her to deepen her lifelong exploration of consciousness and ignite the spark of her life’s purpose.

“My five years of training with the International Academy of Consciousness got me interested in balancing the part of me that knew I could give back in a different way, in addition to and perhaps even complementing my artistic contributions. I want to give back; it’s really that point in my life.”

This drive also eventually led her to Coach Training World where she would explore and develop her concept of “conscious courage.” At a moment in time where Gail says everything seems to be falling aside and turned upside down, she points to courage and the power of taking risks as the means to successfully navigate life.

“Be willing to take a risk – a conscious risk,” she says. “When you’re aware of the risk, it’s not reckless. You decide to act, with total awareness, because something important to you is at stake. When you’re able to take risks, think about them, and make the right kinds of choices, there’s no end to what you can do.”

Her message is both powerful and timely. Its evolution led Gail to the next phase of her journey and the challenges inherent in trying something new – specifically an exploration of the medium best to communicate her message to those who would benefit most from it.

“In the CoachPreneur Academy, we were doing topics for webinars; and I think one of my topics was courage,” she says. “I started writing other topics and realized I had all these thoughts about things I hadn’t really verbalized. Then I realized that I had all these stories – my whole life I’ve told stories. Suddenly something clicked inside me about combining the stories with the coaching. It was joining two personas of mine: the artist and the coach.”

As someone used to communicating largely behind the scenes through mediums that are visual and kinetic, Gail now found herself drawn to the stage. She would create a podcast and, for the first time, use her voice to connect with others.

Her decision resulted in an array of creative, technological and production processes she was unfamiliar with, each of which held its own learning curve.

“If you had told me a year ago that I was going to be doing a podcast, I would have said you’re crazy – it was the furthest thing from my mind,” she says. “I think the saving grace is what I didn’t know before I jumped in.”

Never one to shy away from taking a risk, Gail embraced the unknown. From the use of new software and equipment to the writing, editing, and posting of episodes online, she sailed through each learning curve with tenacity and emerged on the other end with a newfound passion.

It wasn’t easy. But she worked through it one courageous step at a time.

Suddenly, the whole process felt creative. As her experience merged with her newfound skills, Gail discovered a completely new way to tell stories – one over which she had complete creative control and could use in service to others.

“We’re in such huge upheaval right now,” she says. “We’ve all got to experiment. And a lot of my work is about exactly that: experimenting. Each step of the way is a reveal.”

Today, you’ll find Gail producing regular episodes for her podcast, Wildscape Podcast With Gail Conrad. She also works with a broad assortment of innovative clients she describes as “curious and willing to jump in by meeting her halfway.”

“I’m looking for people who are up for an adventure, because everything I do is also about having an adventure,” she says. “Even the coaching should be an adventure.”

Gail has worked with clients in the arts, design and high-tech, as well as those in scientific fields. Within each of these industries, she has supported people who are innovative yet often need help building up the courage to get out of their own way and act.

“I don’t try to convince anyone to do anything,” she says. “They’ve got to have a strong enough drive that, even if they don’t know what they want to do, that desire to make a shift is there. Then I’ll do anything to meet them halfway and more.”

“This is such a great moment to try something out,” Gail says. “Even if it doesn’t feel a hundred percent sure or safe – at this moment, I would say nothing feels safe. Nothing is sure. It’s hard to look into the future, but if you try something out that you have an inkling for, you can begin small. Maybe you get a little hit like, ‘Yeah, I’ll take the challenge and commit to do whatever that little thing is’. It’s such a great way to begin!”

Learn more about Gail at: www.wildscapecoaching.com

Listen to her podcast: https://www.wildscapecoaching.com/podcast/

NOTE: Some material that appears in this article is courtesy of www.wildscapecoaching.com.