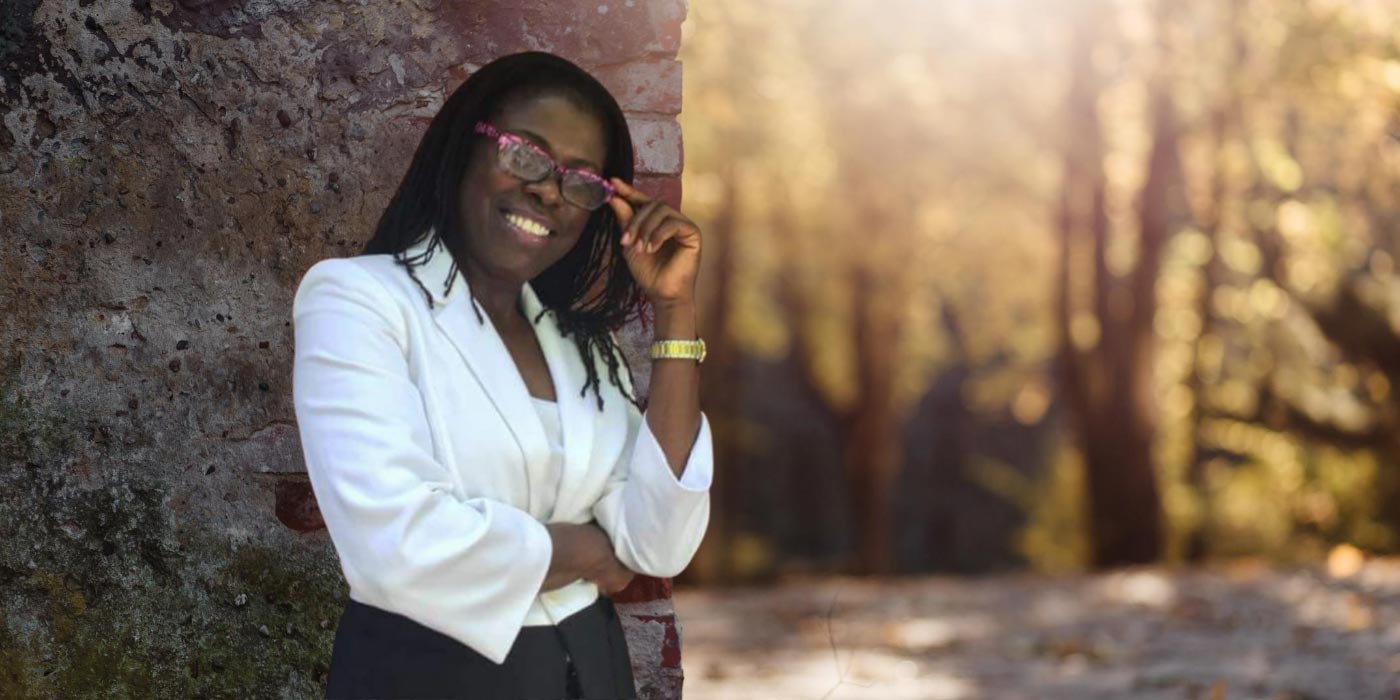 “We always say digital spaces are dangerous, that they consume us. But it all depends on the type of digital community you create.”

Marame Gueye is an Associate Professor of African and African Diaspora Literatures at East Carolina University in North Carolina. She also recently became a Whole Person Coach, supporting clients in a class all their own: women who are African immigrants living in the West (United States, Canada and Europe), often between the ages of 25 to 55.

Within that specialization, Marame (pronounced “mar-AHM”) discovered the calling that would change her life, impacting the lives of countless other women like her.

She became a digital activist.

The first thing you notice about Marame, is that she has a large heart. Whether in person or virtually over the web, you see it in her broad, energetic smile and a pair of welcoming, compassionate eyes (the color of espresso), both betraying one of her lifelong character traits: Marame is an old soul.

Even as a child growing up in Senegal, people often twice her age would seek her advice and counsel on a wide range of personal issues. Like many who find their way to coaching, helping others has always been second nature.

A Big Idea, Prompted by Need

After living in the United States for more than 20 years, with two continents and an ocean between her and the culture she was born into, Marame found herself called to the familiarity of home.

“I have lived in America for 22 years and it has been great,” she says. “But at the same time, it can be very lonely when you don’t have people with shared experiences and shared cultural beliefs to interact with on a daily basis.”

For instance, people speak French in Senegal, making this the primary language used in online communities. For someone like Marame, who has lived in the U.S. for such a long period of time, French is no longer the language she thinks in and uses every day. She speaks it, understands it, and writes it. But it is not the language she effectively communicates in anymore. This resulted in a barrier to deep and meaningful connection within these groups.

“America itself is so unique that, when you live here, your experiences are different from any immigrant from your country who lives in another country,” she says. “In my interaction with women in these spaces, I found there needed to be a space for women from Senegal living in the U.S., so we could have this shared community and experiences.”

“I decided I was going to create a group like that. I didn’t have it, so I created it,” Marame says of her Facebook community, “Une Sénégalaise aux USA” (translated, “A Senegalese Woman in the USA”)

She started by inviting friends. Word spread. And within 24 hours, her new community had more than 1,000 members. In 48 hours, the community had attracted 2,000 members, jumping to 2,500 shortly thereafter.

These numbers are even more impressive when you stop to realize that the group is secret and by invitation only. Members add their friends who fit the description and the admins vet those requests before approving them.

“I freaked out,” Marame says of the overwhelmingly enthusiastic response. “But then I paused and realized: maybe this is a calling and I need to embrace it.”

This led her to one of the core tenets she believed would be critical to a successful online community: culture.

To understand this decision, you need a little backstory. Many contemporary African cultures are patriarchal and male-centered. Though women have a lot of power, in public men often take over. Even within women’s spaces, wherever women gather, men are often the primary and only topic of conversation – a practice Marame believes is valid for many cultures.

“In the culture I come from, it’s about what we can do for men,” she says. “Women are usually pitted against each other based on patriarchal dynamics where they rival each other even when men are not present. Women still see each other as rivals.”

Holding a doctorate and trained in feminist theory, Marame spent significant time attempting to figure out how to connect her academic and scholarly writing – centered in large part on women who never attend school – to something that could actually be put into practice and link to the women she was writing about in a tangible way.

From this personal experience, Marame discovered how she wanted her new group to differ. She did not want it to be like the spaces she was currently a member of where the focus was always on men. Marame saw immense potential in terms of self-development, profession and accomplishment among the women in these communities. Yet all they would talk about is their relationship to men.

This insight gave Marame her first post: “I don’t know what I’m going to do with this group, but I know we’re not going to spend our time talking about men.”

One of the first things they did was divide the week by themes: health care on Monday, education on Tuesday, immigration on Wednesday, entrepreneurship for Thursday, and Friday dedicated to family and relationships (where Marame says members are welcome to talk about men all they want!). Saturday night is “After Dark” during which the community discusses sex and related issues. And Sunday is a virtual market where members can sell goods from home.

As the community grew, Marame recruited five friends to help maintain it and serve as co-admins.

“We had all walks of life,” she says. “We had doctors. We had lawyers. We had women on Wall Street. And these are immigrants who never knew of each other’s existence in America.”

When she saw the diversity of the community she’d created, Marame recognized the opportunity to fashion a mentorship program where people could take inspiration from the experiences of others. So, on Saturday, they also profile one community member, known as “Amazon of the Week.” Using interview-style videos, the Amazon of the Week shares her trajectory, how she came to America, what her job is, how she got to where she is, and any lesson she wants to impart to others.

“As an immigrant, sometimes even if resources are available, it’s hard for you to go to other communities and say, ‘I need this’,” Marame says. “But when you see it in your community or somebody from the community shows you how, you are more inclined to do it.”

The virtual space segued to the real world, where members soon began to meet in person. Within an unbelievably short period of time, Marame and her co-admins built an online community that offered the close-knit, extensive support of a family or small local group despite community members spread throughout the United States.

This connection relies heavily on real-time alerts delivered to mobile devices throughout the community. Members help each other with everything from missed travel connections and local advice based on personal experience to needed resources. This even includes financial support through private fundraising that takes place within the community.

Tapping into the wisdom and expertise of those still living in Senegal, Marame also invites Senegalese artists and designers – especially women – to support and promote women entrepreneurship throughout the community. It’s one more hallmark contributing to a platform that has become highly sought after.

The space Marame has created is nothing short of amazing! She touches on all aspects of someone’s life, reconnecting people in a beautiful way while continually adapting and revising based on the community’s organic needs and development.

“I think what made our group successful was that we would monitor every comment,”

Due to the varying walks of life and levels of education, issues are approached completely different by each member of the group. From this experience, Marame has learned to step out of herself and step into another person’s world to see their line of thinking in a more objective way. She has also learned to be more patient and compassionate while accepting that the community is not homogenous.

For example, a group member who suffers domestic abuse may privately seek Marame’s help through the community. To support this member, she might initiate a fundraiser to provide a cell phone for communication or a hotel room to give this group member a few nights of respite in a safe space – only to watch that individual return to the same abusive relationship a week later.

“[Coach training] helped me identify somebody who needs therapy and somebody who needs coaching,” she says. “I have to realize I cannot fix everybody’s problems. It’s OK for me to have helped as much as I could, even though I was unable to [save them from choices they were making for themselves.] I had to really let go and know not everybody is in the same position as me – mentally, emotionally, psychologically.”

The other thing she’s learned is to set boundaries. People would send “urgent” messages at 2 a.m. Marame would get out of bed and call only to realize it was an issue that could easily have waited until the next day or longer. Boundaries now allow her to effectively maintain the other areas of her life, as a mother and professional, without getting overwhelmed.

In addition to the successful online community she’s created (allying 3,100 women as of July 2020), Marame recently launched her own coaching business on April 19 to further support her group’s community members. In less than 3 months, she has 12 paying clients and has had 55 people book free discovery sessions. All this in the height of the pandemic.

Her secret recipe? Seek out and bring together likeminded people who have the same passion or are invested in the same activism you are.

“Use the resources in your group,” Marame says. “You don’t know it all. You have the passion, but the resources are in your community. If you say, ‘this is what we need’ and create the culture, people will respond. Because people like to help. When people feel invited, they can go to great lengths to help. They want to give back.”

And always keep an eye toward the culture you create.

“We’re at the point where we are online, thinking we are connecting, but we are not,” Marame says. “If you really think it through and figure out how to manipulate it, you create a platform that allows people to connect in a very meaningful way. We end our comments usually with the hashtag #mysisterskeeper – just to remind people of why we are in this space.”